login
login
I connect
I create my account
Book your stay

Book your half day
Refine my search 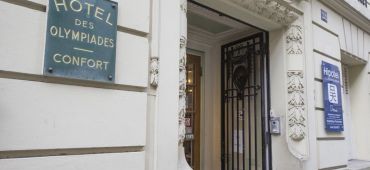 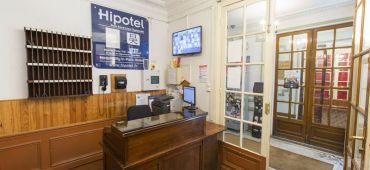 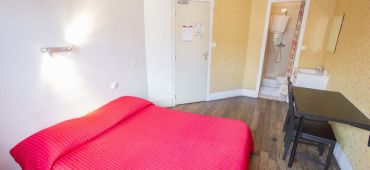 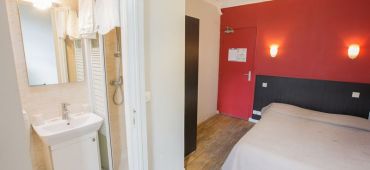 Hipotel Paris Sacre Coeur Olympiades is located in the north of Paris, less than 1 km from the Sacré-Coeur Basilica and near the Simplon Metro Station.

Some rooms have a private bathroom. There is a 24-hour front desk and a vending machine for drinks.

This 18th district is an ideal choice for travelers who are interested in these themes: architecture, monuments and art.

No availibility for your dates between 06 December 2021 and 07 December 2021. Please choose another date.
Nearby hotels Paris 18th 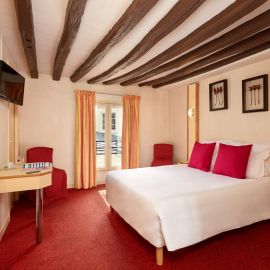 Located nearby the Buttes Chaumont Park, in the east of Paris, Hipotel Paris Buttes Chaumont Belleville offers large rooms decorated in a contemporary style. All rooms are equipped with television. 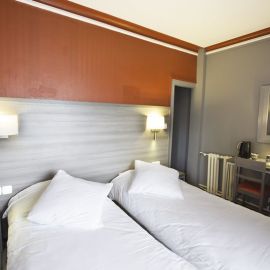 You save
€15
Hipotel Paris Voltaire Bastille ***

Hipotel Paris Voltaire is located in the 11th district of Paris, just a few steps from Voltaire Metro Station. The lively district will allow you to discover excellent restaurants in a typical Parisian atmosphere. 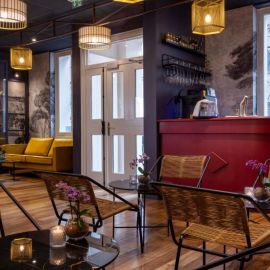 Facing the Jardins du Luxembourg and a stone's throw from the Pantheon, this elegant Haussmannian building houses the Hotel Les Jardins du Luxembourg ****. It is nestled in a dead end which makes it a real haven of peace in the very lively Latin Quarter. The classic rooms with an area of ​​16 m² offer you all the cozy comfort in a tasteful decor embellished with works of art. The superior rooms are more spacious and some offer you an unforgettable panorama over the rooftops of Paris. 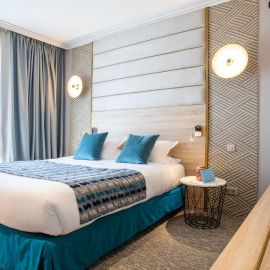 Opened in 2019, the Hotel Nude Paris **** is located in the Montparnasse district and less than a kilometer from the Jardin du Luxembourg. The elegant building from the 1940s houses the 27 rooms decorated with care, giving pride of place to noble materials: velvet, wood, nubuck and marble. Each type of room offers open walk-in closets, a safe, a mini bar and a private bathroom with shower or bathtub.
The multilingual team is at your disposal 24 hours a day and you can use the wifi.

You save
€15
Hipotel Paris Gambetta République **

Hipotel Paris Gambetta République is located 500 meters from Père-Lachaise Cemetery and 300 meters from Gambetta Square. The hotel offers rooms with a flat-screen TV and a private bathroom. 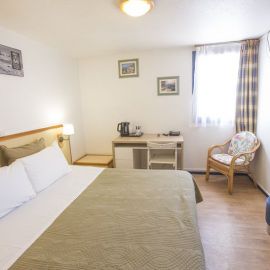 Hipotel Paris Marne La Vallée is located opposite Noisiel RER A Train Station, just 12 km from Disneyland Paris and 10 minutes from the Val d'Europe Shopping Center with items at factory prices.
It has free parking and free Wi-Fi Hostellerie du Lys is located in the heart of the Chantilly Forest, 35 km from Paris. It has a restaurant that serves gourmet cuisine.
Charles de Gaulle Airport and the Villepinte Exhibition Center are 20 minutes away.

The surroundings of the hotel

The distances are calculated as the crow flies, they differ depending on the means of transport used

Discover all the essential Paris, the city with 180 museums and over 2000 remarkable monuments without forgetting its parks and its heritage in the open air. 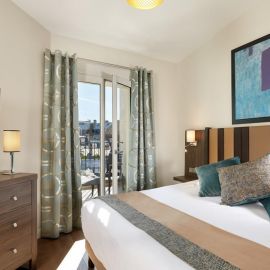 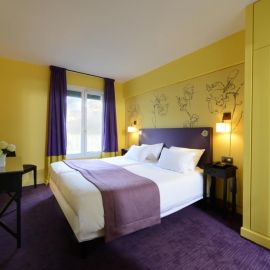 The Hotel Orchidée *** is ideally located a few steps from Montparnasse train station and the Saint-Germain-des-Prés district. A true haven of peace in the heart of the bustling 14th arrondissement, you will enjoy the garden furnished with bamboo or the lounge in the lobby. The reception is open 24 hours a day and will be at your disposal for all your inquiries and activity reservations.
The rooms at the Hotel Orchidée *** offer all the comforts: private bathroom, Satellite TV and wifi. 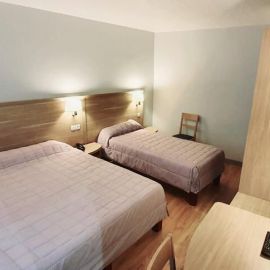 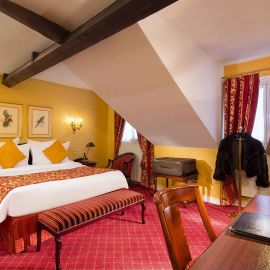 Ideally located in the Invalides district, the Hôtel de Varenne **** is a jewel in the heart of historic Paris. Nearby, you will discover the Rodin Museum or the tomb of Napoleon, and quickly access the Grand Palais and the Champs Elysées. The Hôtel de Varenne **** has 26 rooms decorated in an Empire style and are all equipped with air conditioning, a TV with cable / satellite channels and a safe. Breakfast is served in the Louis XVI lounge or in the garden. 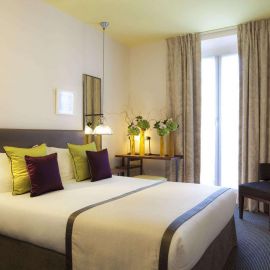 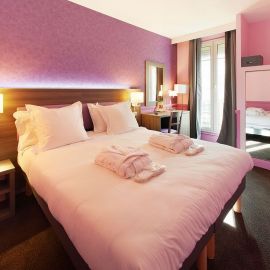 The Hotel Poussin*** is located near the Roland Garros stadium on the edge of the Bois de Boulogne. From Porte d'Auteuil metro station, 100m from the hotel, you can reach all of Paris's points of interest. The reception of the Hotel Poussin*** is available 24 hours a day and has luggage storage. The wifi connection is free throughout the establishment. The rooms at the Hotel Poussin*** have been recently renovated and all have a safe, satellite TV and a private bathroom with shower or bathtub. 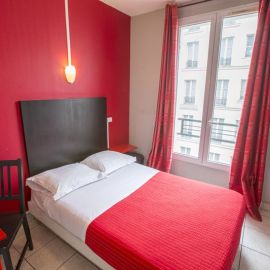 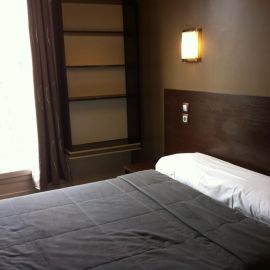 Located a few meters from Gare du Nord Train Station, this hotel offers soundproofed rooms with satellite TV. Each room has free Wi-Fi access and a telephone. They include a private bathroom and simple décor. 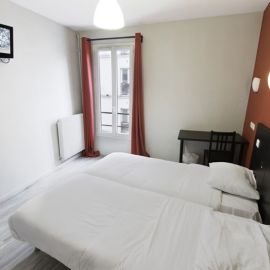 The Hipotel Paris Gare du Nord Merryl is located in a side street of the 18th district. The hotel is just 150 meters from La Chapelle Metro Station. It offers en suite rooms accessible by lift. 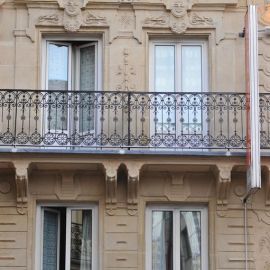 The Hotel Altona **, housed in a beautiful building from the beginning of the 20th century, is located in the heart of Paris, less than 1 km from the Sacré Coeur Basilica. It is close to the North and East stations. Wi-Fi is free throughout the property. The Altona ** hotel has a 24-hour reception and rooms that can accommodate up to 4 people. 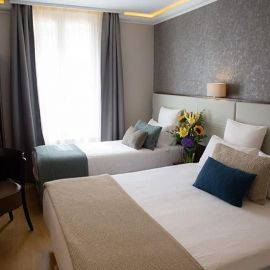 Located in central Paris, Hotel Nord Est is 200 meters from Gare de l'Est Train Station. It offers a 24-hour reception and rooms with free Wi-Fi and satellite TV.The Superior Double and Triple rooms are renovated, spacious and air-conditioned., All rooms have a warm décor with colorful fabrics.The garden on site is conducive to relaxation.